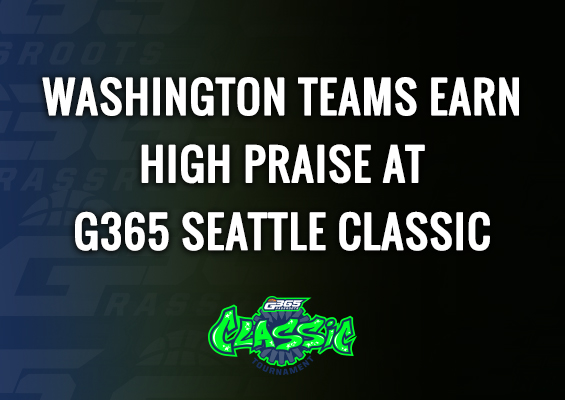 Seattle, WA – Grassroots 365 made its way to the Pacific Northwest to give teams an early opportunity to position themselves as some of the top teams in the G365 circuit. The teams from the PNW did not disappoint as they once again proved they not only have the talent, but also have the competitive drive to take on anyone on the G365 circuit.

The 2023 Local Hoops made an early season statement by defeating G365 PNW Top 5, Seattle Stars in the championship game. Led by G365 Seattle Classic MVP, Christian Moore, the Local Hoops team also made it past G365 PNW Top 10 teams, NW Rain and Kent Elite and will make their G365 Top 25 debut in the upcoming rankings release.

The 2024 West Academy team had been waiting for this event to prove they belonged as one of the top teams in the PNW. After winning their pool by defeating a tough Kent Elite team, West Academy was ready to take on G365 Top 15 Seattle Stars in a championship showdown. However, Kent Elite had other plans as they defeated the Seattle Stars team on a semi-final buzzer beater by All-tourney selection, Nikko Fontenot, to gain another shot at the West Academy team. The championship game also came down to the final seconds, but this time, Nikko was unable to connect on a game tying three-point buzzer beater attempt. West Academy’s, Darrel Gipson, earned 13u MVP honors as he was the most dominant player in the division. Other player that also impressed included All-Tourney selections Davis Fogle (Seattle Stars PG) and Tre Brown (ECBA PG).

The 12U division featured an OT Championship game battle by two G365 Top 10 teams, Team Bradley White and the Yakima Young Gunz. After being down by 12 in the first half, Team Bradley made a run in the 2nd half and took the lead with a minute before the game was tied up and sent to OT. The Young Gunz, led by All-Tourney selection, Marcelino Armendariz, made a push in OT, but the combination of Co-MVPs Nicholas Gene Sanders and Isaiah Cunningham were too much on this day to overcome. Both teams will compete for the top G365 spot in the division as the season continues.