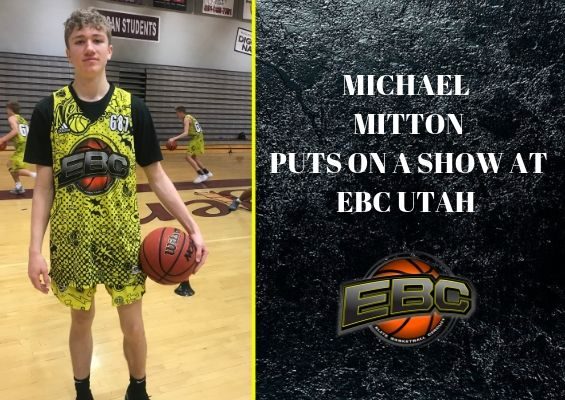 Salt Lake City, UT – The last stop on the Elite Basketball Circuit gave Mountain West players one last opportunity to make a name for themselves before the #EBCJAAC in August. 6-foot-3 8th grader Michael Mitton out of Utah put on quite a show on his way to earn camp MVP. He juked and jived to win the King of Court competition and led his top 20 team to victory by facilitating for his teammates and hitting jumpers or gliding to the basket as needed. Mitton’s performance earned him a spot on the G365 Player Watchlist.
Here are the top ten players that stood out at EBC Utah:
• Las Vegas Prospects’ Michael Mitton was considered the most versatile and efficient player in the camp earning him the title of 8th Grade camp MVP.
• Boise Slam’s Adam Grissom was the biggest and toughest player in the camp. Grissom was unstoppable in the post in the Top 20 game and led all players in scoring making him 7th Grade MVP.
• Utah’s Jordan Kohler showed great composure and court presence playing up a few grades. Kohler is an efficient play-maker and has a solid basketball IQ earning him the title of 6th Grade MVP.
• 2023 guard from Utah Elite Jordan Ross had a terrific camp dishing dimes and hitting floaters in the paint.
• 2023 wing guard Ashton Wallace drained just about every shot he took in the Top 20 game. Wallace runs the floor well and does a great job spacing the floor.
• 2023 Utah Select’s Kevin Doe was the most athletic and high-flying athlete in the camp. Doe has great energy and will attack you on both ends of the floor.
• 2024 Give Sports’ Doren Sacha is a tough competitor that can impact the game both ends. He has an excellent passing and ball handling skill-set.
• 2024 Utah Hard Knox’s KJ Miller showed great efficiency on offense by knocking down open shots and creating plays for teammates.
• 2024 Utah Hard Knox’s David Katoa is an excellent defensive high energy player that is also very efficient on the offensive end.
• 2024 Boise Slam’s Russell Gibson was solid all weekend long as he knocked down jumpers and was willing to defend the toughest offensive players. Gibson also did a great job creating for teammates.